Ali Eslami and Klasien van de Zandschulp are responsible, together with Mamali Shafahi, for the mystical virtual reality-experience SACRED HILL. They collaborated with many others, from audio wizards and costume designers to scent composers. But the one who plays the most essential part, is not credited; that is you yourself.

VR-projects are often difficult to put into words and SACRED HILLmaybe even more than others. Could you give it a shot?

Ali: "Our concept was to make a multilayer experience. Besides its virtual reality component, SACRED HILL is also a physical installation: we have a performance and other senses are involved. We even have a smoke machine. Many different things were needed to cement our overall concept together. Who did what was mostly decided on according to our our skill sets. I mostly did the VR, Klasien worked on the design of the performance and how that relates to the VR. We invited Mamali Shafahi to make the spatial installation. Due to the workflow we had lot of conversations to keep each other on the same page, and inspire each other."Klasien: "The goal was to meld it into one experience. Once you walk in, your story starts, even before you put the VR-headset on. In the room there is a specially composed scent, that is unknown and familiar at the same time. It\'s a little bit of an earthy smell, because in SACRED HILL we play a lot with the idea that the virtual space does not exclude the natural elements."Ali: "I designed the experience as a ritual machine. SACRED HILL speculates what a ritual for the future, when mankind lives in VR, could look like. It\'s a repetitive ritual where you disembody yourself into space and then come back to your body again. As you log in you\'ll have literal hands at first, which you then loose through the calibration process at the entrance. But during your journey through four tunnels you become weightless and you start to experience the surrounding space in different ways. For example, if you move your hands in the first tunnel it has an effect on the floating spheres, while in the second tunnel it will make the tunnel shrink or expand." 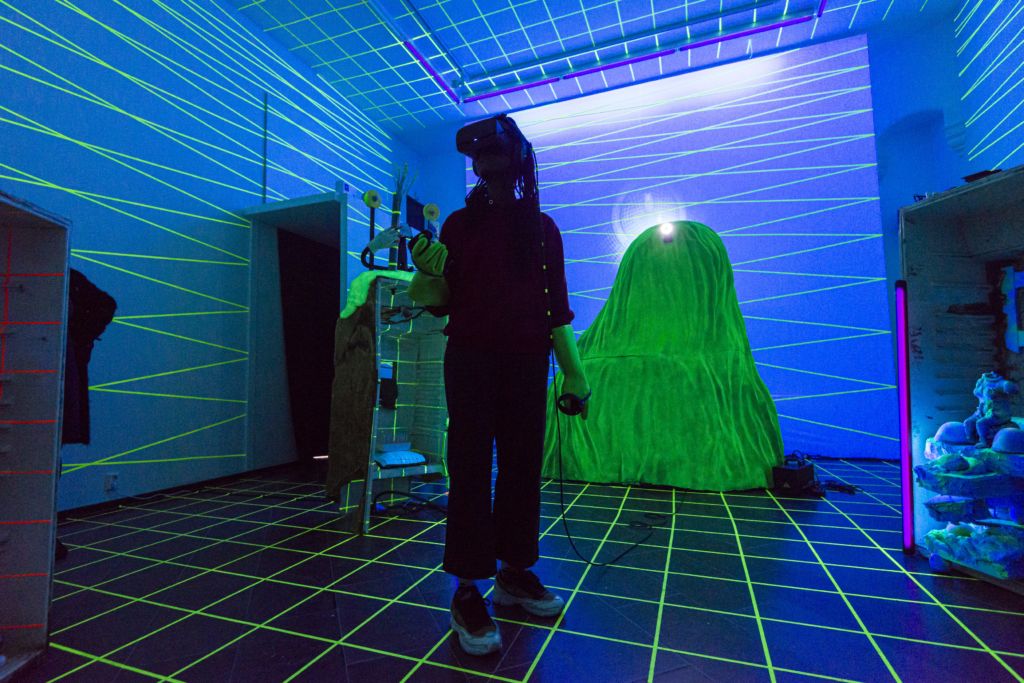 Klasien: "We talked about rituals extensively. Ali and I come from different religious backgrounds. I grew up in the middle of the bible belt, Ali is from a Muslim country. SACRED HILL builds on something that Ali has been working on for quite a while now: what if humans lived in the virtual world? In our installation, you only visit it for seven minutes. But would it be possible to live here? To make it our own? Humans can use rituals and religion to bring meaning to the world. We use that for Sacred Hill, and also elements from yoga, meditation, occultism and witchcraft. That\'s why we chose to start the experience with something similar to a tarot reading, but with a twist. It gives you a tool that you can use in the virtual space."Ali: "We did also put in the Ouroboros-myth: the snake that eats its own tail. The tunnel you enter is a torus. It gives you the illusion that you move toward this machine, while in fact you are not moving an inch. You are stable whilst the whole room moves through you. At the end understanding awaits, and a glimpse of SACRED HILL."

Throw me a number: in what year will mankind spend more time in virtual reality than reality?

Klasien: "People often say \'reality\' and \'virtual reality’, like they exclude each other. In doing so, you neglect the fact that virtual reality is also real."Ali: "I take VR for granted as I\'ve been working in it for the past six years. To me, the virtual city that I construct in VR is as real as Amsterdam. I can go there anytime, I know my way, it is part of reality already."Klasien: "You just have to take a look at our daily life to see how much we already live in a similar state. Commuting in the train, with everybody on their phone or laptop. Do you still see people looking outside, having small talk with other passengers? We already passed that year: I think more people live in a virtual reality than not." 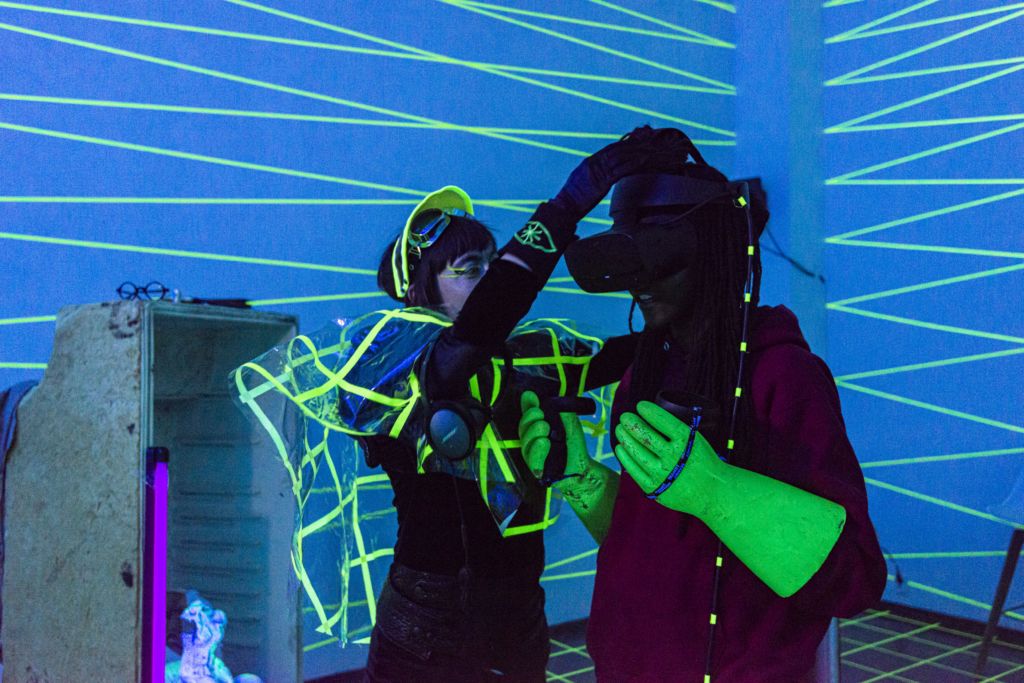 Ali: "We already live in a fragmented reality. In our daily routine we are jumping in between the pieces. I go to Instagram and it is a different reality, with a different mind set. Than I go to Twitter, and my mind works differently. Or I check Facebook, or get up from the couch to look outside; another reality every time."Klasien: "Many people consider the switch to virtual reality a very negative thing. But it can be positive too. We can make it like a really beautiful room. We can build it and design it as we want. You often you see a lot of VR designers design buildings in the way they appear physically around us. But in VR you don\'t need walls or a roof. You can make it as a beautiful as you want. You have endless freedom."

It\'s not only the designers of SACRED HILL that enjoy a lot of freedom. So does the visitor to SACRED HILL...

Ali: "Klasien and I agree on the fact that a big part of the narrative is built by the user. We provide a space where the user can build their own narrative. I\'m allergic to voiceovers, especially in VR. It\'s super weird when someone is voicing over what you are already experiencing. Then I am like: \'Shut up! I want to experience it for myself and understand it myself!\'Klasien: "Your experience is your experience. We only provide the building blocks. The rest is up to you and your imagination, and the meaning that you yourself attribute to the experience."

How often should people experience your ritual?

Klasien (laughs): "At least once a day!"SACRED HILL is a world premiere, in association with Het Nieuwe Instituut, presented at the NFF Interactive Expo, which can be visited free of charge every day from 27 September to 3 October in AG, Space for new art and media (Minrebroederstraat 16) from 13:00 to 20:00 (Mon-Thu) and on Saturday and Sunday from 11:00 to 20:00. Performances are on Saturday the 28th and Sunday the 29th of September 18:30 – 20:00, Monday through Thursday 15:30 – 17:00. The performances on Friday the 27th of September and Wednesday the 2th of October will be done by maker Klasien van de Zandschulp. Sacred Hill is on display at AG, Space for new art and media.
back to
Share this page

Stories & Beyond: Accent on France and Belgium