Forget Zoom, Skype or Microsoft Teams. There are other ways — more exciting ways — to collab­o­rate in the future. With WEIGHT­LESS BRICKS ACT II: COLLAB­O­RA­TION archi­tects John Cruwys and Paula Strunden explore the possi­bil­i­ties with a virtual garden where two people can work together. We spoke with Paula about their project.

In a nutshell​“WEIGHT­LESS BRICKS is a research led design exper­i­ment in three acts, by John Cruwys and myself. This second act deals with the idea of collab­o­ra­tion. Not in the sense of sitting in front of a screen or by speaking with a colleague over a distance, but through spatial means. Both John and I are trained as archi­tects, so we were thinking about how to create a shared long distance space. In our instal­la­tion you share the same inter­ac­tive, three dimen­sional envi­ron­ment. It’s a garden for two people to tend to. We called it mixed reality, because you get a VR-headset, but on the floor you\‘ll feel wood chips and you\‘ll also get a phys­ical object. For one person it is a rake, for the other a watering can. You have to work together to plant seeds and culti­vate the land­scape in virtual reality.” 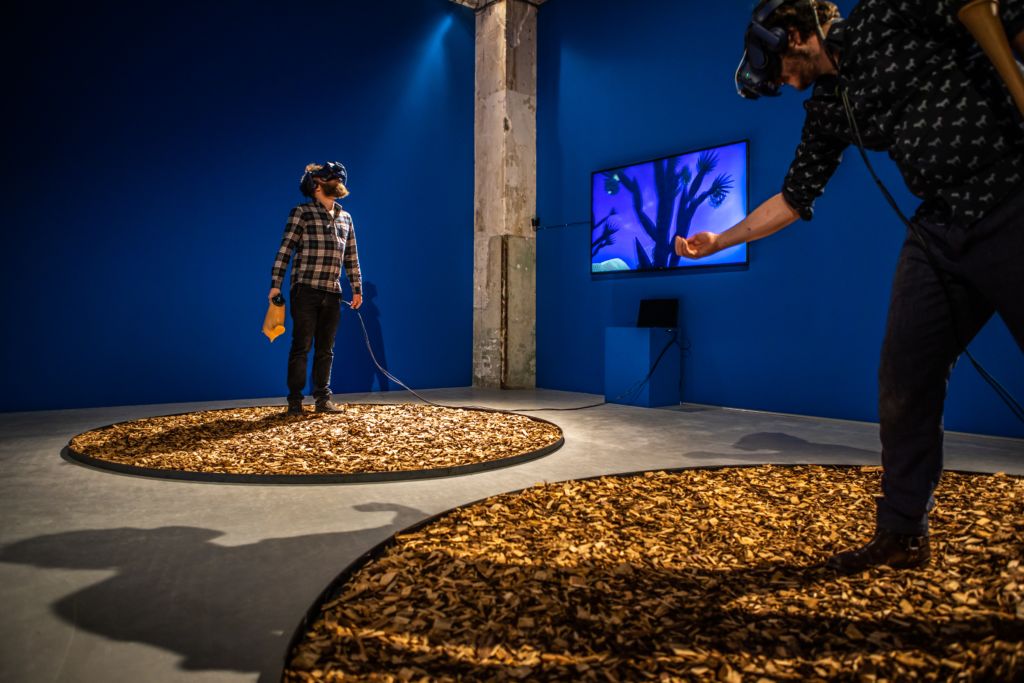 What kind of expe­ri­ence awaits the viewer?​“It\‘s quite a playful, spec­u­la­tive approach. In reality the two \‘work spaces\’ are next to each other, but they could also be miles apart from each other. Once you put on your headset it becomes one virtual space. When you are tending the garden, the sun will rise. You can spend a day in that imag­i­nary garden, where your actions define the narra­tive. It\‘s not meant to be a game, there\‘s no aim. You can collect berries, pull up vegeta­bles, and shake the trees. Stay as long as you like, as long as you are happy to collab­o­rate with your partner.” What are the inter­ac­tive elements? ​“In the virtual garden you can interact with numerous elements. You can pick berries, drop food, what­ever. We work with Leap Motion, meaning you don\‘t have to hold controllers: your hands are the controllers. This makes the inter­ac­tion intu­itive and creates the strong sense of being in the virtual with a phys­ical body. We don\‘t show your collab­o­rator; you only see him or her as a couple of floating hands. We exper­i­mented a lot with using avatars, but decided against it. It means that you can embody the same posi­tion as the other person; you can liter­ally stand in each others shoes. That\‘s a very weird feeling.” What is a unique aspect of your work? ​“I think the pres­ence of phys­ical objects is not often done in VR: the combi­na­tion of phys­ical and digital reality. What is also unique is that we invite you to collab­o­rate, but not for gaming or enter­tain­ment purposes. WEIGHT­LESS BRICKS is quite concep­tional and artistic. Possibly because of our back­ground as trained archi­tects, with a focus on a strong spatial approach.” 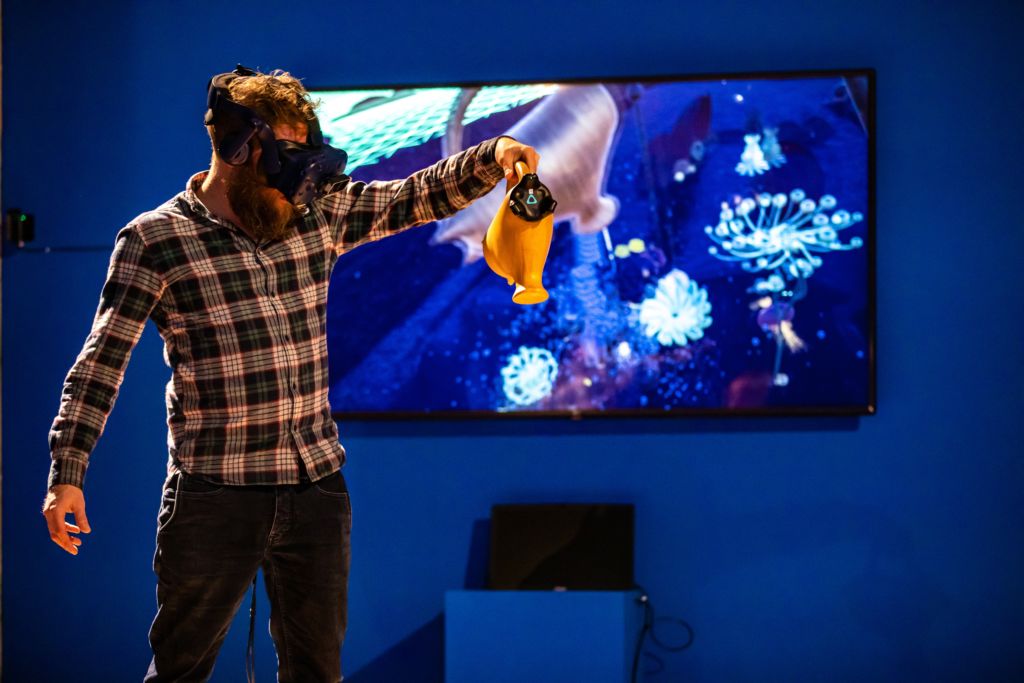 What are you most proud of? ​“It might sound grim, but we designed this before the COVID-crisis. For a year we were thinking about the poten­tial to connect people in different ways than they were used to. It\‘s quite partic­ular that our work turned out to be so timely. Before, we had to say to people \‘imagine how you would collab­o­rate in 2035\’. There\‘s no need for that anymore. \‘Proud\’ is the wrong word, but it turned out more timely than we expected. What we are proud of, is the other things we have learned. For example the fact that the need for your personal space is almost bigger in virtual reality than in real life. That\‘s the thing about research-led design: it will lead to things that surprise you, the maker. That makes it so inter­esting.” For more infor­ma­tion about Paula and John\‘s inter­dis­ci­pli­nary research plat­form, you can go to their website. Which of your fellow selected inter­ac­tive projects is first on your to do list? ​“That\‘s very diffi­cult to say, I still didn\‘t read up on all of them. I will just take my time and expe­ri­ence them all. It looks very eclectic; each looks inter­esting for different reasons. John and I are very new to this field. As a profes­sion, archi­tec­ture can take a long time to react to new tech­nology, so we are super excited just to be part of this selec­tion; it\‘s not a world that we know well. It\‘s just very unex­pected.” More about WEIGHT­LESS BRICKS ACT II: COLLABORATION
ga terug
Deel deze pagina