You've won an HFM Award. Great, but what happens next?

08 October 2020
Winning filmmakers and producers reacted to the prizes they received at the end of last year’s online, but no less dynamic, HFM 2020. As one of Europe’s must-attend international exchange platforms for professional collaboration and creative development, the HFM creates a vital bridge between the Dutch and international film industries. In total 30 highly promising new projects were presented within the BoostNL, Stories & Beyond and New Dutch categories to myriad potential partners across the world. Let\'s take a look at where are winners are after they\'ve won their HFM Award. Applications for HFM 2021 are open now. Apply here before May 10th. 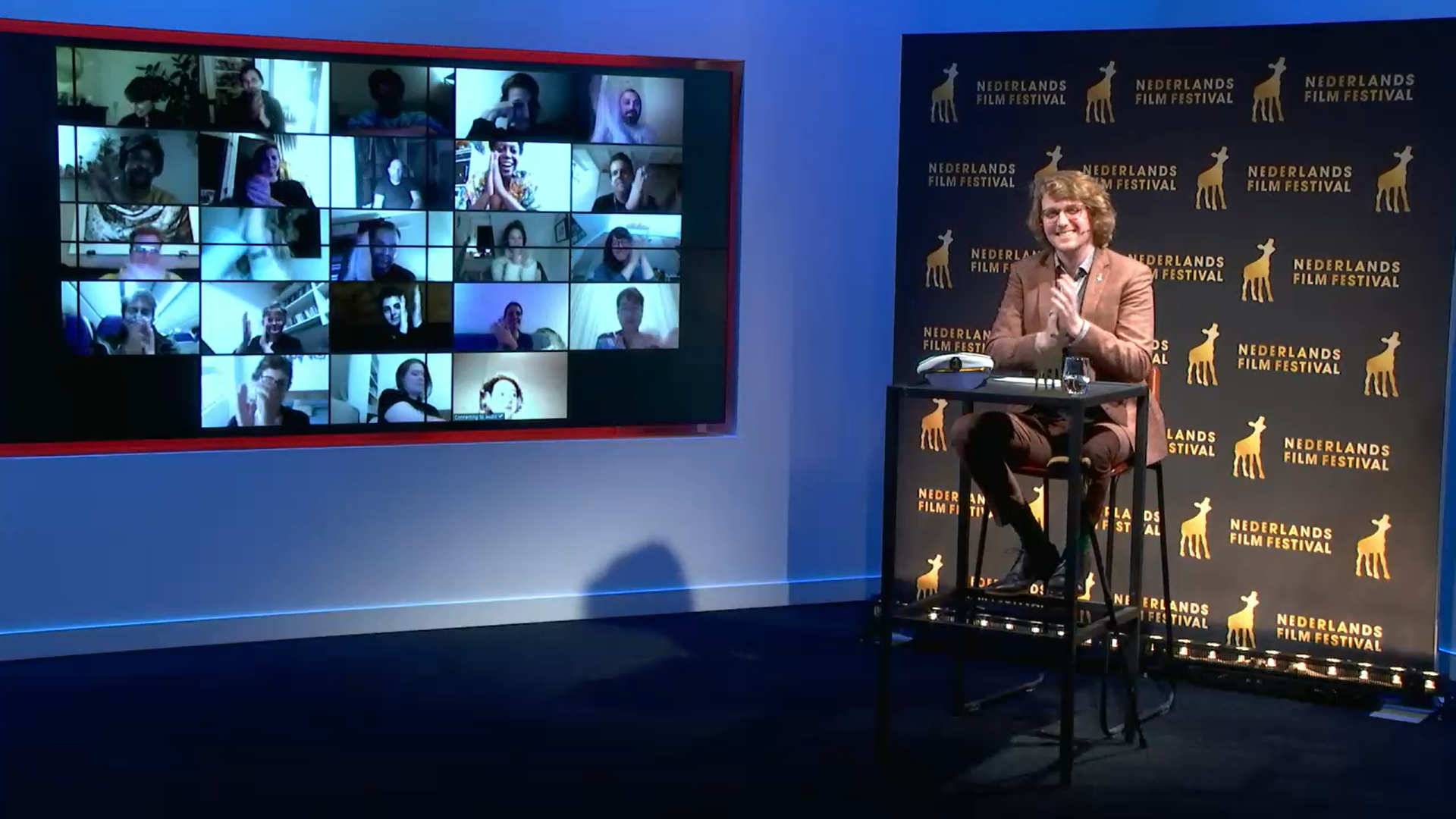 NFF Script Development Award The NFF Script Development Award went to the project Marina (Brazil), written and directed by Laís Santos Araújo & Pethrus Tibúrcio (Aguda Cinema). In the film, Marina, the only black teen in her wealthy private school, prepares for her dreamed 15th birthday party. Meanwhile, dozens of bodies with bullets holes are found in her tropical hometown. She remains unaffected, until she starts hanging out with Pedro, the seamstress’ son, a guy that could be her first love or the next body gunned down.“We were so so very happy, and it was kind of a surprise,” said producer Nara Aragão (Carnaval Filmes).

“The Holland Film Meeting was a special opportunity for us to talk about the project, to listen to a lot of feedbacks, to have experts talking about the issues of the film. We really think this award was a good kickstart for the film, it is like a fuel, especially because now we need to complete the financing of the film that we expect to shoot in 2021.”

Looking back on their HFM experience, Laís stated: "The program gave us a lot of perspective on our project Marina. As the screenwriter, it was very valuable to get feedback from people in different parts of the world. To know how this Brazilian story is perceived in a different context is a powerful tool, that\'s been helping me to shape the film in the best possible way. During HFM, we had meetings with experts and producers to discuss artistic aspects and the project was also awarded with a script development award! This recognition has been a conversation opener with possible financing partners and got the attention of different professionals. Also, since we were a part of BoostNL, we went to Cinemart and met many producing teams from Europe, Asia and Latin America. The experience took our project to a much more mature stage of development and we\'re glad and thankful we were a part of it."Currently, the team of Marina has succeeded in gathering the majority of their funds, and are awaiting the end of the corona pandemic to be able to move forward with production in Brazil. Laís Santos Araújo is taking advantage of this time to develop a new version of the screenplay with all the insights she’s gained over the past year, including at BoostNL.The jury consisted of Anna Ciennik (script consultant, France), David Kimbangi (Film4, UK) and Susan Korda (story & post-production consultant, USA). Special jury mention for Holy Electricity – Tato Kotetishvili, Tekla Machavariani, Irakli Metreveli (Ogasavara).The Camalot/Filmmore Emerging Cinema Award The award was won by Georgian director/writer Tato Kotetishvili for Holy Electricity (Georgia/The Netherlands). The film is produced by Irakli Metreveli (Zango Studio) and Tekla Machavariani (Nushi Film) and co-produced by the Dutch company The Film Kitchen (NL).Nika and Nodo, two crusaders in contemporary Tbilisi, smell business opportunities when giant neon crucifixes appear around town. But selling home-size copies door-to-door turns out less successful than thought. Adding ‘holy electricity’ as an extra feature seems lucrative, but Nika fears to be doomed to hell. A black comedy about the power of religion and the dangers of gullibility.

"Besides the awards and promotion, HFM gave us the opportunity to create a competitive, international filmproject. The experience at HFM brought us knowledge and confidence, helped us to find new partners and most importantly gave us a big boost to create a great film."

The much-coveted Works-in-Progress Award, sponsored by Intermission Film, went to Anouschka (The Netherlands), described as an interactive production about a magical black girl\'s journey through space and time. The project is directed by Tamara Shogaolu, written by Sandy Bosman’s and Elinor Vanderburg and produced by Jamari Perry, Tamara Shogaolu & Marcela Stolzmann for Ado Ato Productions.“It’s been really great being able to have conversations with people in the industry here in the Netherlands and also from outside in different parts of the world,” said Tamara Shogaolu of her HFM 2020 experience. “We have had conversations about potential co-productions and about how to expand the reach of the project. We were super excited about all the potential that there is for what we can do. We are designing an interactive experience but then also got a lot of feedback about expanding it into a film and potentially a series and exploring that further.With ANOUSCHKA, Tamara Shogaolu has secured a further boost in the shape of the inaugural Latinx Inclusion Fellowship Series, initiated by the Los Angeles Latino International Film Festival (LALIFF) and sponsored by Netflix. Together with her HFM success, this support gave ANOUSCHKA the right nudge to be able to start production, which is currently underway with the radiant team of Ado Ato Pictures in tow.The jury consisted of Edgar Daarnhouwer (Paradiso Filmed Entertainment, Benelux), Anne-Sophie Lehec (Cinemarket.io, France/Germany) and James Warren (Intermission Film, Netherlands/UK/USA). Special jury mentions for Nosferatu Reanimated – Erik van Schaaik, Moniek Kramer, Ate de Jong (Mulholland Pictures); Wood – Flynn von Kleist, Matthijs Bockting, Guusje van Deuren (The Rogues); en Black Pete, or: How I Found My True Self and Accidentally Unleashed a Race War – Gonzalo Fernandez, Ashar Medina, Marc Bary (IJswater Films).HFM Market Potential Award The award went to This Is Home (UK) following screenwriter Silas Parry’s impassioned pitch at HFM. The project is produced by Gill Parry (feral Inc.). A director is yet to be assigned.When a quiet young dealer falls in love with the guy who stashes his drugs, and an overweight shop-keeper falls for a homeless girl – they are forced to choose between the people they love and the lives they’ve always known. This is Home opens on a rain-soaked Scottish council estate, and ends with the discovery of alien life deep off the coast of Spain.“We were thrilled to receive the Market Potential award for This Is Home!,” said Silas. “It gave a real boost to our work so far, and came at a perfect time to drive This Is Home onto the next stage. ”The Parry team has continued its successful development route by participating in Screen Scotland\'s BellRock programme, which culminated at the online CineMart of International Film Festival Rotterdam (IFFR) last February. They are actively working with award sponsor Alphapanda in building a strong marketing package around their project, aspiring to attract the right financiers and talent this year to get their beautiful project into production as soon as possible.The jury consisted of Mathias Noschis (AlphaPanda, Germany), Debbie Rowland (We Are The Tonic, UK) and Sergina Stavroulaki (Heretic Outreach, Greece). Special jury mention for Holy Electricity – Tato Kotetishvili, Tekla Machavariani, Irakli Metreveli (Ogasavara).Ready to kickstart your HFM journey? Apply today!Apply for HFM 2021 Written by: Nick Cunningham
back to
Share this page

HFM 2020 Stories and Beyond report