The NFF Conference took place on Friday, September 28th. Below you will find a description of the programme and a photo report. Do you have a substantive contribution to the Conference or other program components? Please fill out the comment form.

The Nederlands Film Festival will present the NFF Conference Friday 28 September at Stadsschouwburg Utrecht, during which national and international speakers will discuss the current state of affairs across the Dutch AV landscape. Important guidance of this day is the advice of the Council for Culture of March 2018, the reaction of the Minister to the recommendation to the House of Representatives, dated 2 July 2018 and subsequent reactions and developments in the industry. Aim of the NFF Conference is to increase the quality, visibility and accessibility of Dutch productions. Now and in the future. 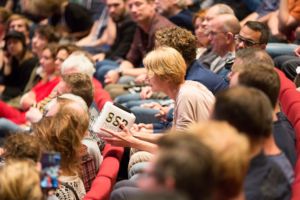 The NFF Conference starts with an all-encompassing program for the entire Dutch AV industry, in which the visibility of Dutch productions and their transition from linear to online television is discussed moderated by Nadia Moussaid.